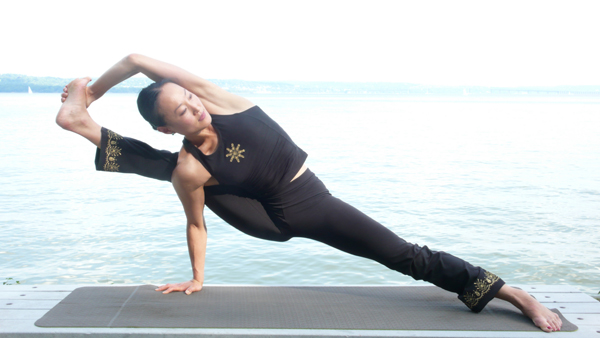 Kung Fu Yoga® classes teach the student how to modulate from force into softness and back again through cultivation of the core, breathe and attention.  Static alignment – yoga poses, progress into kinetic alignment – martial art kicks and strikes.

The result is greater power, peace and centeredness.

Hwalan’s class is a favorite among students as well as other yoga teachers.

Kung Fu Yoga® classes are as deeply healing as they are challenging.

"Hwalan makes magic with movement and makes movement magical. An intense spirituality pervades her approach to yoga, deeping the flow from earth to air. But there's an athletic dancer in her too, one she awakens in her students even if they've never moved this way before. As a rank beginner, I’ve been spellbound and inspired to continue. I imagine that more seasoned practitioners, including dancers and other movement professionals, would have all the more reason to stretch their bodies and boundaries by working with her."
Magda Bogin | New York-based novelist and literary translator, founder and director of Under the Volcano, taught at Columbia, Princeton and City College, CUNY, Kellogg National Fellow, National Endowment of the Humanities, National Endowment of the Arts, New York Foundation of the Arts, Russian writers’ colony at Peredelkino